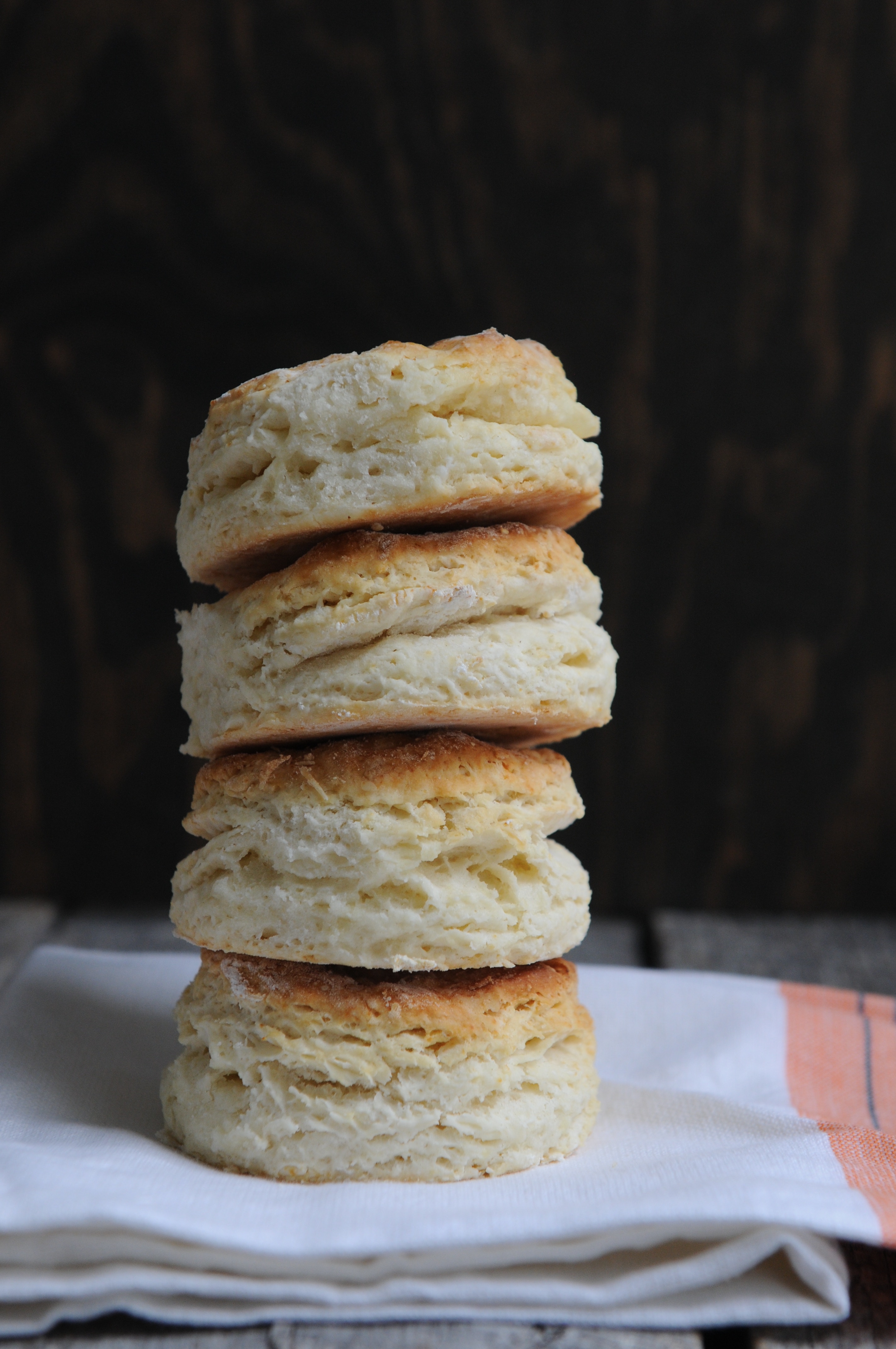 While we’re on the topic of biscuits, let me take this opportunity to opine about the meal that I would probably choose as my last, if it ever comes to that: I’d ask for hot buttered biscuits, sopped in molasses. One of my earliest food-related memories is of being scooped up into my father’s lap at the head of the table, after a meal of fried chicken or pork chops and biscuits. More often than not, those biscuits came from a shiny blue cardboard Pillsbury can, popped open and laid out on a cookie sheet, perfectly uniform cylinders of pale dough. So unlike scratch biscuits with a tender and crumbly interior, these bread products were a construction of mechanically produced mini-layers of dough. Or the biscuits might have been baked from that other convenience food product of the 1960s and 70s—Bisquick. Clumpy flour measured from a cardboard box straight into a bowl, mixed with milk, and scraped from a large spoon into golfball sized blobs. After supper, Dad would pour a puddle of dark molasses in the middle of his dinner plate and place a pat-sized slice of margarine in the middle. With his fork, he’d work the margarine into the molasses, creating a caramel-colored pool, with small bits of yellow floating about. We would then commence, together, to drag our biscuits through the molasses, lifting the dripping morsels into our mouths.

The following biscuit recipe comes from the Jarrett House Cookbook that I purchased at the historic inn in Dillsboro, North Carolina. This recipe produces consistently fluffy, high-rising biscuits, and I’ve used it for over thirty years. My daughter uses this recipe now, and her biscuits are even better than the ones I make.

Preheat oven to 425. Cut the shortening into the 2 cups flour, working with a pastry blender until the mixture resembles coarse meal.  Stir in both milks with a fork, and blend well. Transfer dough onto a well-floured board and fold/knead for a few minutes, until the mixture keeps an intact shape and stays firm. You will likely have to add a extra flour while kneading, because this makes a wet dough (up to ¼ cup more flour).

Pat or roll out dough to about ½ inch thick. Cut biscuits with a biscuit-cutter, and place on ungreased cookie sheet about 2 inches apart. Bake for 9 minutes, or until golden brown on top.

These biscuits are best enjoyed hot, buttered, sopped through molasses, while sitting on your daddy’s knee. 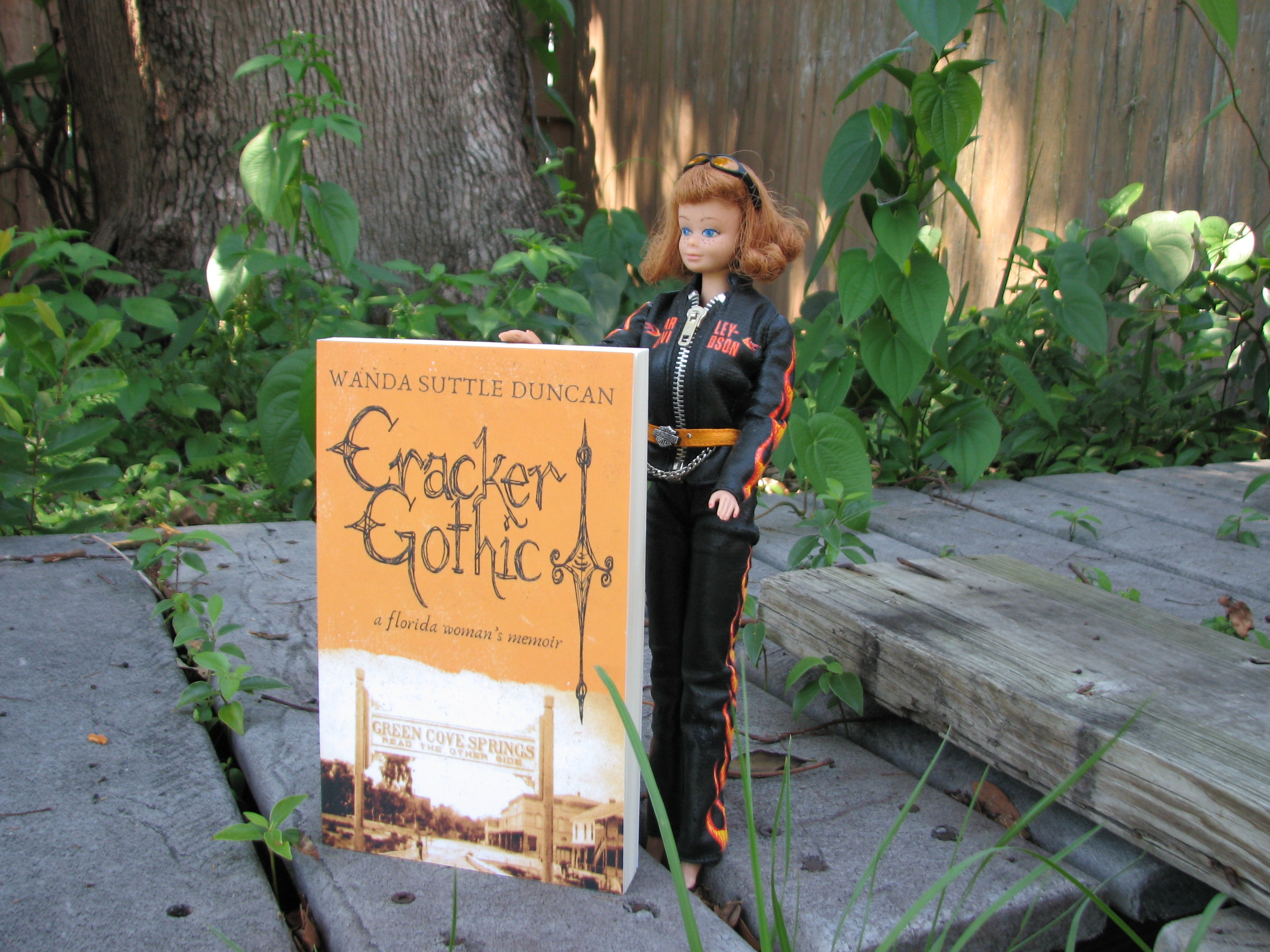 I am over the moon about my latest endorsement! Midge LOVES Cracker Gothic. I just got this text from her: “I couldn’t put it down! Probably because it weighs more than me, and I got stuck!” She also says, “The really great thing about this book is how it coordinates with my Harley outfit! It’s the perfect ensemble for Friday nights at Saloon 17.” Midge is a tough critic, and we all know that between her and Barbie, Midge is the more bookish of the two. So her opinion means a lot! Thanks, Midge!

The class from my years at Clay High School in Green Cove Springs that had the longest-lasting effect on me was EH101, a dual credit college-level English course that I took my senior year. Our teacher was Coach Robert DeWitt. Coach DeWitt not only taught English, he was the boys’ basketball coach, a published and award-winning poet, a Purple Heart and Bronze Star recipient who had fought in the Normandy invasion of Omaha Beach. He was a large man, tall and bulky, with a graying-blonde comb-over, frequently a quiet smile on his face and a bit of twinkle in his eye. I doubt that most of us who knew him as a coach and English teacher ever fully appreciated what his life had been like before we knew him, and what it was like outside the walls of our high school.

Nonetheless, EH101 stuck with me, and I am ever grateful to Coach DeWitt for introducing me to the study of Greek and Latin roots of the English language. It sparked in me a lifetime fascination with etymology, the study of word origins (not to be confused with entomology, which is the study of insects…not interested so much in that, thank you very much). I love learning about the roots of words, odd words, extinct words, idioms, colloquialisms, euphemisms, portmanteaus. One of my regrets in life is that I did not embrace this interest early on and pursue it as a vocation. But I do get a lot of joy from reading books about where our words come from, and more recently I’ve taken up listening to podcasts on the topic.

A Way with Words, Lexicon Valley, and The History of English are some of my favorite podcasts that delve into all things word-nerdy. A relatively new podcast I’ve just discovered is Something Rhymes With Purple, hosted by two Brits – Susie Dent and Gyles Brandreth. Listening to their podcast is like eavesdropping on a couple of friends who are chatting whilst sipping Earl Gray tea, in a cozy thatch-roofed cottage nestled in the English countryside. But these two are not uptight, prudish, overly academic word scientists. They have a lot of fun with these podcasts. The episode entitled “Lalochezia” deals exclusively with swear words. For example, you might ponder where the phrase “fornicate under consent of the king” might lead, in a strictly etymological sense, of course. And in case you wondered (I certainly did), lalochezia refers to the exhilarating sense of physical release that one feels upon spewing profanity.

At the end of each episode, Ms. Dent shares a few of her favorite and very obscure words. Two that she mentions together are bang-a-bonk and gongoozle. I will demonstrate their usage here: When I am in Green Cove Springs, I love to bang-a-bonk at Spring Park while I fondly gongoozle the St. Johns River. It usually depends on the weather, but I try to both bang-a-bonk and gongoozle at least once every day. Based on what I’ve seen, there are a lot of people who take the opportunity to bang-a-bonk at the park, especially now that the city has installed new heavy-duty bench swings along the river bank. Once bang-a-bonking is underway in the swings, it’s usually followed by prolonged gongoozling sessions. Sometimes bang-a-bonking and gongoozling occur simultaneously, but it seems to depend entirely on personal taste.
.
.
.
Bang-a-bonk means to sit lazily on a riverbank.
.
.
.
Gongoozle is to observe things idly, and in particular to enjoy watching a body of water and passing boats.
.
.
.
Coach DeWitt wrote poems about the St. Johns River, and I’ll share some of them in a later post. I like to think that he, of all people, would have appreciated the idea of bang-a-bonking near the edge of this magnificent river, gongoozling while poetic lines about sky and water, birdcalls, lapping waves and sailboats drifted through his thoughts and onto paper.

The Okefenokee Swamp covers almost a half-million acres in south Georgia, spilling over the state line into north Florida. It is a vast and imposing wilderness, and has been a protected National Wildlife Refuge since 1937. Before that, it was also home to Swampers, Crackers, people who were social outliers. My ancestors. The Chesser Island Homestead is a preserved 19th-century Cracker structure hidden deep within the Swamp, open to the public, where visitors can experience what life for Swamp pioneers might have been like. When the Okefenokee became federally protected property, the residents within the Swamp were forced to leave, relocating to nearby towns, deserting the life and livelihood they had known for generations. Some of the Chessers traveled into northern Florida, where I was born, creating my ancestral line back to the Swamp. I did not visit the Okefenokee Swamp nor Chesser Island until I was well into my adult years, but I have come to love and appreciate its beauty, its serenity, and the sense of primeval wisdom that I feel whenever I am there. Connecting back to an actual ancestral home in a primitive place became an important touchstone as I wrote my memoir. These were not people of means or any type of societal stature. But they were resilient and resourceful, much like pioneers who settled in other frontiers of our country: the Appalachian mountains, the far West. I am proud for their blood to run through my veins. I am proud that a Swamp runs through my memoir.

This is Spring Park in Green Cove Springs. The water feeds from the spring boil into the pool, flows out the deep end into a waterfall, then meanders to the river in the spring run. I cobbled together three short clips to make this video, so it’s not exactly professional grade. But it has music!

The water that emerges from the spring has a high sulfur content, and on most days, even the area surrounding the park has a particular “aroma,” often compared to rotten eggs. If you grew up drinking sulfur water, you might actually prefer stinky water to bland, filtrated water. I sure do. Spring Park has always been a popular place for people to gather, to sit under the huge oak trees, gaze into the dark turquoise-colored spring, enjoy cooling breezes from the river. My parents met at the Park on a blind date, so my origin story is tied to this spring, where clear water bubbles up from the earth. Sulfur water, with its distinct taste and smell, runs through my memoir.

Hoofer reached up on a long shelf and pulled down a stack of flat, stiff snakeskins. Four, five, six feet long, and anywhere from three to eight inches wide. They were like thin pieces of tree bark. Grays and browns, speckled with deeper browns and blacks, repeating hypnotic geometric patterns. All similar, but with unique differences, like snowflakes. Earth-toned tessellations. 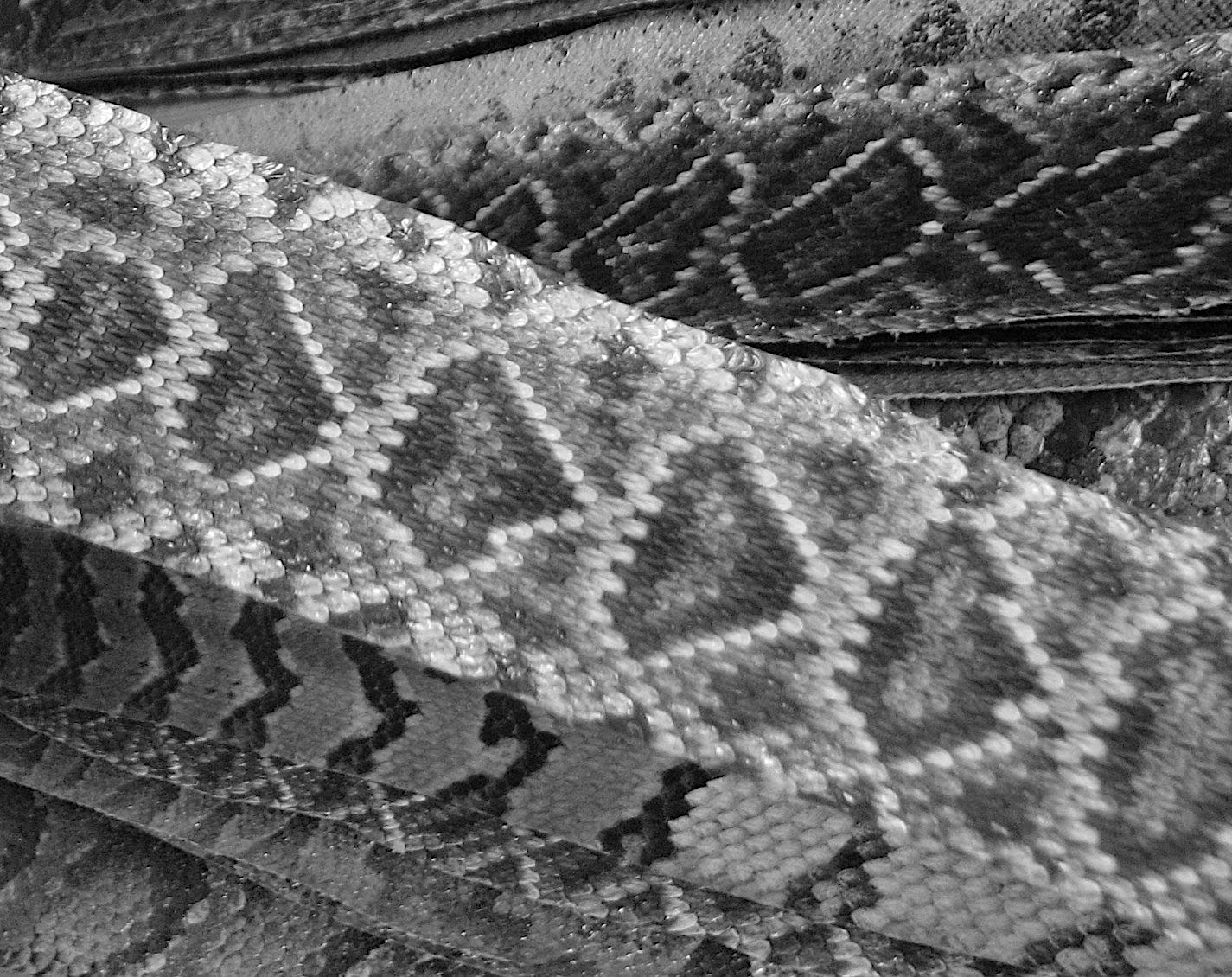 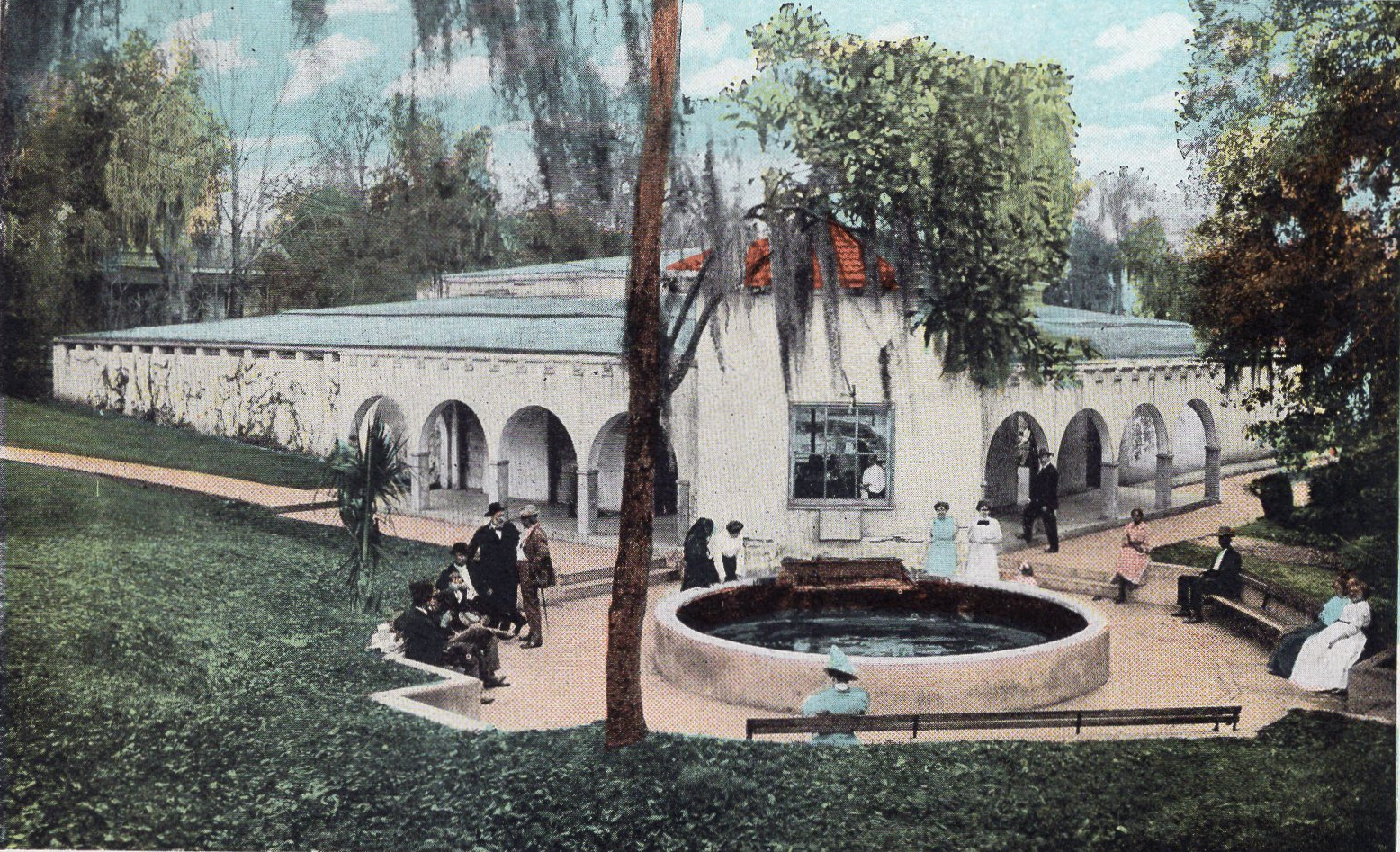 “This wonderful spring is located in the Park opposite the Clarendon Hotel. The water boils up from a large fissure, some twenty feet below the surface, at the rate, it is said, of three thousand gallons per minute. It is as clear as a diamond, and the effect is most beautiful at noonday, when the sun shines directly into the spring, and objects can be seen at the bottom tinted with the prismatic hues. The swimming pools are only a few feet from the basin of the spring, and the water flows through them in an immense volume, but so quietly as hardly to be observed. The tourist will find nothing in Florida more delightful than a bath in this water. Ladies who enjoy bathing should not forget to take their bathing suits with them, as “swimming in the pools” is a great sport at Green Cove, and those who cannot swim may easily learn under the tuition of Miss Smith, the obliging Managress of the Spring. It is said that you can enjoy these swimming baths every day in the Winter. Certainly it has seemed odd enough to me, just after reading a letter from home telling of a severe snowstorm, to go and take my bath, with the accompanying chorus of mockingbirds in the surrounding trees.”

-excerpt from a tourist brochure, Where to Go in Florida by Daniel F. Tyler, 1880